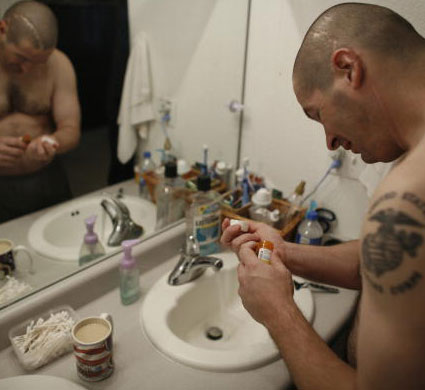 If you’re like me, you’ve already heard that veterans coming home from Iraq and Afghanistan were suffering from PTSD. What I did not know, and what you may not have known either, was the immense scope of the problem. Approximately one quarter of all Iraq and Afghanistan Veterans of America (IAVA) members struggle with symptoms related to PTSD after leaving the service, says IAVA political director Kate O’Gorman.

A March 28th, 2014 online CNN report stated “researchers estimate that as many as 300,000 service members may meet criteria for PTSD.” Beyond these alarming numbers lies the ominous connection between PTSD and veteran suicide. I watched Rachel Maddow interview Montana Senator John Walsh on Wednesday, March 26th. Senator Walsh told Rachel that 22 veterans kill themselves by their own hand each day! This grave statistic is a tragedy beyond anything I had imagined. Very nearly every hour of every day a vet commits suicide. When I heard that figure tears welled in my eyes. I applaud Senator Walsh introducing a Senate Bill that hopes to bring needed benefits to these suffering veterans.

There is a problem with a shortage of mental health care providers, especially in rural areas. But that shortage is not the only issue. Mental health care providers trained in mindfulness are more rare still. PTSD is a stress related illness. Therefore, mindfulness training is effective as a remedy beyond mere talk therapy. If you know a vet who is struggling with depression, anxiety, addiction, and/or PTSD providing him or her with a resource for mindfulness training may be another way to help.